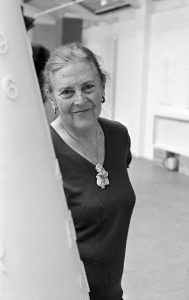 “What is the purpose or role of art in an age of accelerating social change and environmental uncertainty?”

‘Conversations in Time’ brings together a free audiobook of Suzi Gablik’s ‘Conversations Before the End of Time’, first published in 1995, with a series of new conversations inspired by her original dialogues.

The book was driven by what she believed was a crisis point for art, humanity and the environment.

“If the apocalyptic strain in my own thinking was in some ways the trigger, the starting point from which the book launched, it was necessarily the place where it ended up. When conversing with people, frequently I found myself in the role of merely feeding the meter – creating a spaciousness through listening, and relying on something new to emerge out of the moment. Inevitably it did.” Suzi Gablik

Now in her 80s, the book is as relevant as it ever was. On her own re-reading she said, “It could have been written yesterday…”

These conversations and the audiobook are distributed within the Public Programme ‘Conversations in Time’, part of the European Capital of Culture Aarhus 2017.

“These specially curated conversations open up ideas and stories that interrogate and contemplate the place and role of art and creative pursuits as we push into the next decades of the 21st century.” Juliana Engberg, Programme Director Aarhus 2017

Liquid Reflections Works from the Anne-Marie and Victor Loeb-Foundation